The Power of Visuals 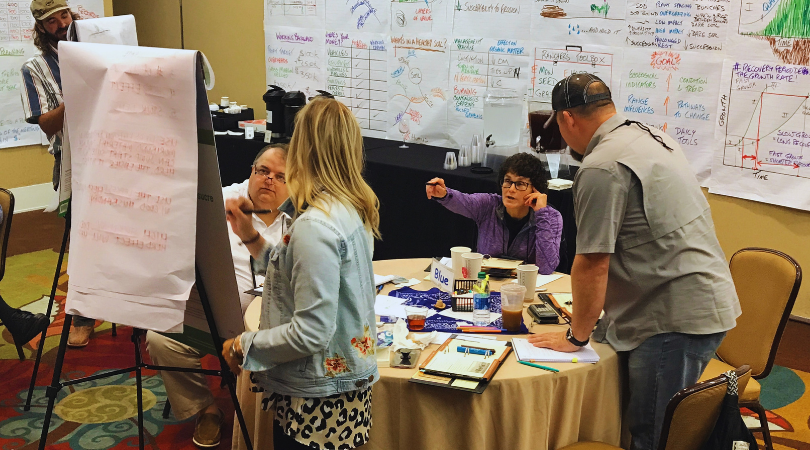 The flip chart is one of the most important pieces of equipment on the ranch. If you are not using one, it is likely costing your businesses tens of thousands to hundreds of thousands each year. Every time you have a meeting on the ranch or when discussing something as a ranch team someone should be writing something down for all to see. A large white board can work, but I prefer flip charts as they can be hung around the room or rolled up and pulled back out, while white boards get erased.

Have you ever had a discussion and then thought someone was going to do X and two months later nothing has happened, or maybe they did Y? If the result of that meeting was written on a flip chart capturing who would do what by when, then the misunderstanding is less likely to occur. At each meeting of your team there should be a minimum of two flip charts. One with the topics to be discussed and another with an action plan (who will do what by when).

Have you ever been in a discussion, and someone keeps bringing up the same point over and over? Why do they do that? It is because they don’t feel like they have been heard. When they bring it up, write their point on the flip chart and ask, “Do I have that right?”, when they say yes, they are more likely to have felt heard.

Effective use of the flip chart takes practice, but it isn’t hard. Use lots of colors, but avoid orange, yellow, pink for writing, as they are not very visible from far away. Write big, include diagrams or drawings as they help bring forth creative ideas. Hand everyone the marker at some point. It shouldn’t be just one person always at the board. Spelling proficiency is optional.

2 Responses to “The Power of Visuals”

Can you tell me what size paper you are using and what kind of easle works best. Looking through amazon at the different ones is exhausting.

Hi Greg. I like these flip charts. “Sustainable Earth 27″ X 35” We buy them from Staples. Some people prefer the “sticky” type. Look for the largest size. For the easels on Amazon search “Lightweight Aluminum Telescoping Display Easel, 70 Inches, Black” I like those.

Going Backwards Working for Wages »
« What Can We Do vs. What Should We Do?